As I haven’t been sewing lately I thought I’d better switch to the Baked element of my blog title to keep things ticking over until the sewing machine starts whirring again.

A lasting memory of Pancake Day in my childhood is of my mum’s frustration as the first pancake always ended up as a splodgy mess in the frying pan!  Once that was out of the way all was usually well but it does seem to be the case that you need to get that initial attempt out of the way before things start to come together.

I rarely make pancakes on Pancake Day or at any other time but I had a hankering for something sweet on Tuesday night.  I was surprised when W didn’t seem too bothered (he is normally very quick off the mark when it comes to consumables) and he was adamant that we should only have them if it didn’t mean shopping for ingredients.

Not to be defeated I decided to use up the remains of some spelt flour I’d bought to make soda bread last year and found this recipe online.  As I assembled the ingredients it dawned on me that as we don’t drink milk I was going to be stuck for one of the main components!  The only potentially suitable liquid I had was coconut milk so I gave that a go.  My slightly amended list of ingredients was as follows :

I followed the method in the original recipe and they came out really well,  although the first one was slightly anaemic as the pan wasn’t hot enough.  They were very easy to turn over as they are fairly substantial.  I’m not very proficient at flipping crepe-type pancakes!

We topped them with creme fraiche, blueberries and honey and ate the lot!

These would be perfect for breakfast/brunch too, especially if you made the batter the night before to save time in the morning.

Sorry for the delay …. the draw did take place at the allotted time but I didn’t get a chance to make an announcement straightaway! 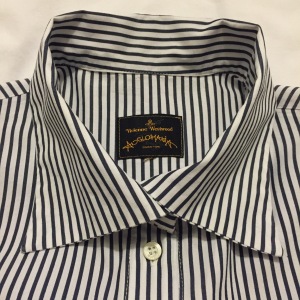 Instead of a hat for the draw I used the voluminous pocket of my lovely new apron from The Stitch Society in Yorkshire.  I heard about them through an Instagram post by Claire Montgomerie, a yarn guru and Editor of Inside Crochet magazine, who I met when she taught at West Dean College.  I was lucky enough to be able to buy a sample apron named Doris which my Doris is modelling here!  The fabric is a very sturdy pinstriped denim which I think will last forever.  The Stitch Society guarantees its products and will carry out repairs if they are ever needed.  They even shortened the apron for me – and it came in its own bag with a little badge and a needle case.  I’ve decided this purchase definitely doesn’t breach my unwritten pledge to limit the purchase of new RTW! 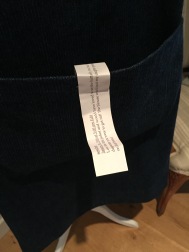 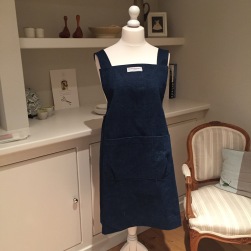 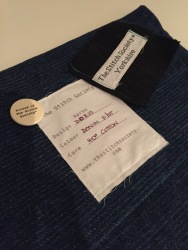 Anyhoo, back to the important business.  There was quite a lot of interest in this giveaway and I always wish there was something for everyone but the winner this time is ……. Sheila from Sewchet.    Sheila is the organiser of #stitchingsanta which was a great success so I’m pleased to be able to send her something, although the shirt is destined for her daughter.   Sheila – you already have my email address so let me have your home address and the shirt will be on its way to you.  Otherwise DM me on Instagram.

It was a busy weekend as we’ve been celebrating my parents’ diamond wedding anniversary.   I think they looked gorgeous in their wedding photographs!  It was a freezing day with a smattering of snow on the ground and my mother eventually had to resort to a coat!   Her outfit looks like a suit but was actually a dress in a pink textured fabric.  I’m pretty sure she still has the little sparkly bag somewhere. 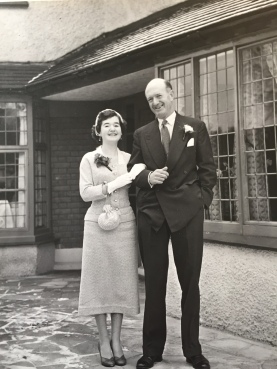 All this is helping to distract me from the fact that for some reason I seem to be without my sew-jo at the moment.  Not sure why but I hope it returns soon!