I don’t usually like to mention Christmas before the beginning of December at the very earliest but the very talented (and incredibly productive) Sheila from Sewchet is once again organised #stitchingsanta and, having had fun taking part last year, I signed up again.

We’ve now received details of who we’ll be buying/sewing for (there’s also a knitting/crochet option) and I’ve been checking out my recipient’s blog so I can plan what to make.  I’d already had a couple of ideas that could be tweaked to suit specific interests so all I need to do now is get on with it! The maximum spend on a gift is £10 but there seems to be no limit on what you can make/sew/knit from stuff you already own.  Looking back over the last three years –  if you are Sheila’s recipient you’re in for a treat!

The idea is that we give a few sneak previews before Christmas without giving the game away so once I get started I’ll be doing that either on here or IG.   The full story will be reported in the New Year.

My recipient last year was Sharon from Creativity and Family and I really enjoyed making presents for her.  My gifts came from Beth at After Dark Sewing.  Since then both of them have become Etsy entrepreneurs!  Here’s a selection of the gifts we gave each other.  I use the little zipped purse all the time – although it obviously no longer has the chocolate coins in it – and I loved Beth’s fabric gift wrapping.  The fabric itself became pocket linings in a pink dress. 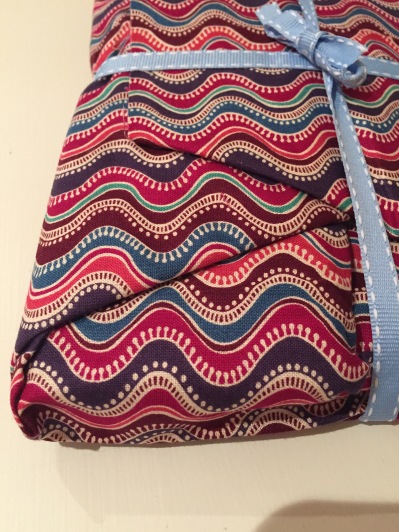 I’m off to Sewmance in Brighton on Saturday with @vintage_charity so I’m hoping I’ll get some more inspiration there.  I’m also looking forward to meeting up with some other sewing friends, including Louise from Seams Odd, Louise and @lois.h.