Back in 2015 I spotted this pattern as part of the Simplicity Star Sewist competition but failed to get my act together and send off for the free pattern to take part.

Moving on a couple of years and there was the pattern on the swap table at our sewing group.  I grabbed it straightaway.  I think pretty much everyone else has already made this pattern and I’ve seen some lovely versions on IG and blogs.

As part of my recent fabric/pattern stock take I’d decided to pair the pattern with a curtain fabric remnant from C & H Fabrics (now known as Closs & Hamblin which sounds much more upmarket!).  The dress and the fabric both have a 60s vibe which I hope work well together.

I’ve previously reported that in advance of our last sewing group meet up I’d made a bedsheet toile and cut out the main fabric.  I managed to sew the bust and back (double-ended) darts, shoulder seams and assemble the neck facing at the meeting which was a good start.

I finished the dress at the weekend and can now tick off the first garment from the list I’ve committed to making. This is a simple pattern with several variations which also lends itself to customising.  I didn’t have enough fabric for the collar but I may try this next time.  I’m not a fan of short sleeves, I normally prefer three-quarter length or sleeveless, but decided to give them a try.  I had just enough fabric to add some in-seam pockets.  I would have gone for patch pockets but I wasn’t able to pattern match – or even have two matching pockets – so abandoned that idea to avoid it looking a complete mess!

I had meant to use the pocket bag template from the Clemence Skirt in Tilly’s Love at First Stitch but used a different one (possibly from the SOI Tulip Skirt) which is much smaller.  I shall definitely make the pockets bigger next time.  I have very small hands but can only just get them in!

I’ve been struggling to find a good quality invisible zip since C & H changed the zips it stocks.  I’ve had several frustrating experiences but when I was on a sewing meet up in Brighton recently I bought one from the Brighton Sewing Centre.  It went in first time with absolutely no problems.  Sadly, due to fabric limitations, there’s absolutely no pattern matching across the zip!

There’s a hem vent at the back of the dress which also worked beautifully despite me having failed the read the instructions properly (or at all)!

I rarely have blog photos of me ‘in the wild’ as Mr Jane Makes is not the most willing of photographers.  However, I had my sister on hand on Sunday morning and she was more enthusiastic!  She was rather unsympathetic about my concerns at all the bees buzzing around me but she certainly made an effort.  The hydrangeas in my mother’s garden have now been re-named hyjanegas – I do seem to be emerging from the middle of them in one of the photos! 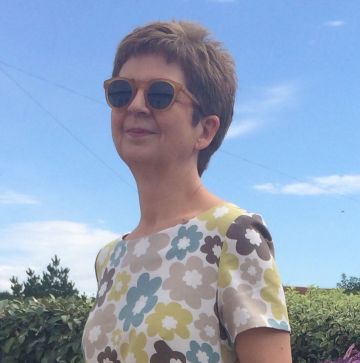 I’m so pleased with this dress.  It’s smart but comfortable and would look great in so many fabrics.  I already have ideas for other versions.  If you are one of the few people who hasn’t already used this pattern I can definitely recommend it.

I shall now move on to the next make on my ‘list’ – I’ve just not decided which one yet.  I was temporarily distracted by seeing @cathysewsstuff’s lovely Esme top when I met up with her on Saturday in The Eternal Maker.  I’ve made more than my fair share of Esme dresses but have never made a top.  I went straight home, cut one out and finished sewing it last night.  I’m wearing it today!  The fabric is from Ditto and I really like the abstract floral design.  I’ve tucked it into a denim skirt but it will also work well with jeans I think.