Despite completing my project for this year’s Refashioners community challenge ages ago I just haven’t had a chance to take any decent photographs of the finished garment.  This post really is a bit last minute!

I took part in the challenge back in 2015 when the garment to be transformed was a man’s shirt.  I made two simple tops and a skirt and Mr J-M acquired several new shirts from the charity shop that I couldn’t bring myself to attack with the scissors!  I failed to get involved last year when it was the turn of jeans to undergo a makeover.  I had the jeans but somehow not the motivation.  Too many other things going on.

This year the subject matter was Suits.  My initial plan was to refashion a suit into something that wasn’t garment-related.  I may still pursue that idea at some point.   I bought a navy blue man’s suit at a knock down price but was put off when I subjected the trousers to closer inspection.  Suffice to say I put the suit through the wash and re-donated it!

New inspiration came from the Toast website where I spotted a pinstripe pinafore.  I didn’t immediately think of a refashion but decided I really needed such a thing.  I then spotted a fairly nice (and very large) pinstripe suit jacket for £10.  Thankfully Portia confirmed that a jacket on its own is fine and one or two of the projects posted as part of the inspiration round limited themselves to jackets only.  I’d also been rather put off men’s suit trousers after the earlier experience!

Given my recently discovered love of the Tilly & The Buttons Cleo dungaree dress pattern a combination of the two seemed like a good plan.  As usual I failed to take any progress shots but here’s the BEFORE.  It was quite a big jacket!  The fabric composition was described as virgin wool and polyester.  Not sure if the polyester referred just to the lining.

That’s about all the major unpicking I did.  I then …

I really wanted to retain the breast and front pockets for my dress so I sewed up the front of the jacket, eliminating the lapels, ensuring that the main pockets were the correct distance apart.  I didn’t actually chop the lapels off and finish the seams until I was happy with the location of the pockets.  This did make the whole thing a bit cumbersome to get through the machine!  I also spent some time trying to match the vertical stripes at the front of the dress which was tricky but almost successful.

In order to position all the pockets at the right level I had to move the front pattern piece (again with seam allowances removed) quite a way down the jacket front.  This didn’t leave me sufficient length for the front of the dress so I added an extension piece cut from the rest of one of the sleeves.   The stripes run in the opposite direction and I really like the way this has turned out. 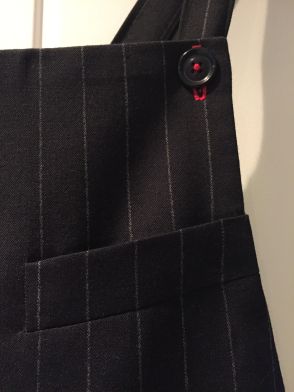 I was determined to achieve this refashion without buying anything new so I used up some lining left over from another project and some nautical fabric left over from birthday bunting for the facings.  I understitched the facings because I didn’t want any topstitching.  I wasn’t happy with the way the fabric poked out at right at the top of the back where it joins the straps (where understitching couldn’t easily reach) so I did a small amount of topstitching there which did help. 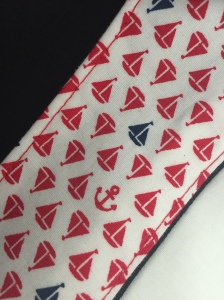 I had some spare dungaree clips but wanted to the dress to be less casual so went for buttons this time – using the original buttons from the suit front.  Given the facing fabric had red boats on it I thought about red buttonholes and made up a sample.   This got a good response when I asked for people’s opinions on IG so that decided me.  I also wanted to use the original label from the jacket given it was By Royal Appointment!  I’m not sure when Coopers were tailors in Regent Street as I’ve not been able to find any reference to them apart from a jacket being sold as ‘vintage’ on Etsy. 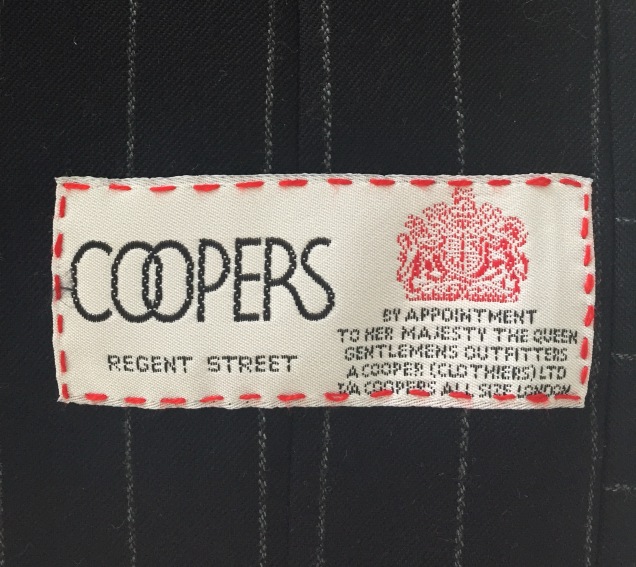 I very rarely make anything with buttons but my machine does do quite a nice neat buttonhole. I also sewed the buttons on with red thread.  I sewed the label on the back of the dress by hand because it moved around all over the place when I tried to machine sew it and I wasn’t happy with the finish.

I’d been given two tickets to Thread in Farnham (thank you Karen) for Saturday 30th and was determined to get this dress finished so I could wear it!  This meant finishing it at 6.30 that morning and I have tidied up a couple of things since then.  I may also go back and handsew the hem.

I have to say that I LOVED wearing this dress and had several compliments.  The lovely Jo from Sew Creative in Petersfield asked to take my photograph while Mr J-M engaged in a conversation with Steve about overlockers!  One of the nicest moments of the day was meeting up with fellow blogger Mumokio who recognised me and came and introduced herself.

I didn’t take any photos that day but Mr J-M spared 30 seconds at the weekend to take some photos – these are the only ones without a ridiculous grin which was the result of one of his appalling jokes designed to make me smile!  I’m wearing it with a RTW shirt in these pictures but I’ve also worn it with a long sleeve jersey top. 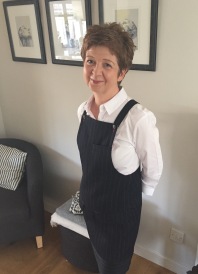 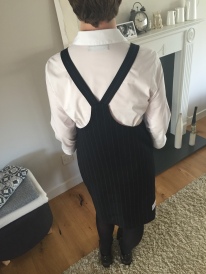 If you follow @bustersew on IG (or his blog Mensew) you will have read about his refashion.  He named his refashion Executive Dungarees –  – I’m hoping my dress can be included as an example of this genre!