As you know, we’re big fans of charity shops but I am quite fussy about cleanliness (Ha ha, Mr Jane Makes would say, obsessional more like!).  Anyhoo, this does mean that I subject charity shop clothing purchases to a close inspection and sniff before I buy them and everything goes straight in the wash when we get home.  Mr J-M is less fussy and has been known to wear something immediately without sanitisation!

I’d been looking out for a black leather biker jacket for ages and when I spotted one in the Cancer Research shop I grabbed it straightaway, despite a slightly stale whiff.  When I took it to the dry cleaners the following day I discovered it would cost £50 to clean it.  I’m not that keen on dry cleaning at the best of times and I balked at spending that much with no guarantee of a good result.

I remembered I’d once had to handwash some leather gloves after they fell into a muddy puddle in a car park and weren’t discovered until I returned to the car several hours later!  I decided to throw caution to the wind and wash the jacket.  I found and ordered this product online.  It was cheaper on Amazon but seems to be currently out of stock.  It does say it can be used to wash leather in the washing machine but I decided that was a risk too far.

The bottle that arrived was a good deal smaller than I was anticipating and the instructions said to use between a third and half the contents for one wash.  I ignored that and just used a couple of generous squirts in a sink full of tepid water.  I swished the jacket around for a few minutes, giving the lining a good scrub.  The water turned a very murky shade but I think (hope) that was the colour coming out of the leather rather than dirt!

I gave it a couple of rinses in fresh water.  Again I ignored the instructions which said to rinse once to allow some of the conditioners in the shampoo stay in the leather.

Not surprisingly the jacket was soaking wet and impossible to wring out so I hung it on a plastic hanger in the garden overnight.  Once it had stopped dripping  I transferred it to a warm room for a day and finally popped it into the airing cupboard for a few hours.  The aim was to ensure that it dried slowly to avoid it turning crispy!

Once it was completely dry I put it on and performed a few contortions to stretch it back into shape.  The final step was to use some of this to feed and soften the leather.

We’ve been using this balsam on shoes for years.  It worked really successfully on the jacket.  The leather is lovely and soft and the smell has gone.

The shampoo was expensive but I’ve now passed it on to my sister who has three jackets to wash so the cost per wash will work out considerably cheaper than dry cleaning.  To be honest, now I know it is possible to wash leather successful I’d be inclined to use a gentle wool wash next time which would work out much cheaper.

I’ve also bought a new pot of balsam but the previous one lasted years so it’s pretty good value.

I’ve just realised that this is my 100th post on Jane Makes.  A blogging century!

We have a brilliant charity shop in Chichester run by St Wilfrid’s Hospice called Retro & Vintage.  W and I usually make at least a weekly visit and rarely come out empty handed.  Amongst a treasure trove of china, clothes, vintage board games, jewellery, hats and more there’s usually a good pile of vintage dressmaking and knitting patterns as well as some fabrics and notions.  They also have an annual sale in the Assembly Rooms which is well worth a visit if you don’t mind a crush.  The next one is on Friday 26 August from 9.30 am – 3.30 pm.

I don’t have much experience of vintage patterns, although I do pick them up in charity shops when I particularly like the illustrations.  This one for example.  I’d love to make W one of these and perhaps when he’s completed his diet regime the medium size will be the perfect size.

The image for these little dungarees/overalls is just so adorable I couldn’t resist buying this one.  I’m guessing the pattern is from the early 50s but perhaps someone with more knowledge of such things can enlighten me.

Weldon’s Patterns were the creation of Walter Weldon, a journalist turned scientist who founded Weldon’s Fashion Journal in the late 1800s.  I believe the paper patterns came into being around 1879. He was also responsible for the Weldon process for recovering manganese dioxide for re-use in chlorine manufacture, which seems a world away from sewing patterns!

This one, which cost me £1, doesn’t have a separate envelope, it’s just a sheet of paper folded into three with the instructions printed on the back and the pattern pieces placed inside.

The pattern was complete and very neatly folded and to start with I thought it was unused.  However, when I looked more closely I could see evidence of tiny pin holes so I’m hoping that Mrs Parker, whose name is pencilled on the front, did actually make them up.  The pattern pieces have no printed markings on them, just a series of punched holes which indicate the pattern piece number, notches, grainline, pocket placement etc.  It’s a one size (age 4) pattern.

I decided to have a go at making up the dungarees as my introduction to sewing vintage patterns.  I used some floral fabric I’d picked up in the same charity shop and had already made a bag from (and have a skirt cut out waiting to be sewn).  The instructions were pretty straightforward and easy to follow.  There were no fit issue either as at that point the project was entirely experimental.

The pattern instructs you to face the front arm holes with binding and I decided to use some floral bias binding along the edge rather than as a facing so I could to add to the overall floweriness.  I continued the binding across the top of the bib as I didn’t like the way it looked when it was hemmed as per the pattern instructions.   I also bound the edge of the back facing and understitched it to give a better finish.  This fabric frays quite a lot as it’s a loose weave so I zig-zagged the seams and if I make this pattern up again I would probably follow the alternative suggestion to use French seams as this would give a neater finish inside.  This fabric is a bit bulky for French seams.

I started with pattern matching on the bib and the straps match each other where they button at the back but I gave up after that and the little pockets are so sweet I wanted them to show up (that’s my excuse).  The repeat on this pattern means that pattern matching requires far more fabric than I wanted to use.

I rarely do buttonholes but was pretty pleased with this one.  I never fully believe my machine will actually do this all by itself!

As the dungarees came together and I realised just how cute they were going to be I started to look around for a suitable four year old to try them.  Luckily one of my colleagues has a little girl who is almost four and when I showed him a picture of the dungarees in construction he said he was pretty sure she would love them.

I finished everything but the final attachment of the straps at the front and the hem.  I just tacked them so they could be adjusted if required.  Ruby was getting quite excited about her assignment so off they went for a fitting.  She loved them and apart from the length they were a great fit.

I’ve now finished them off and here they are in all their glory ready for their new owner. 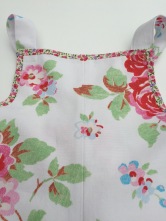 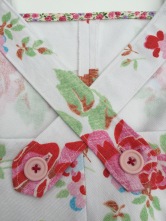 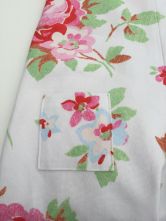 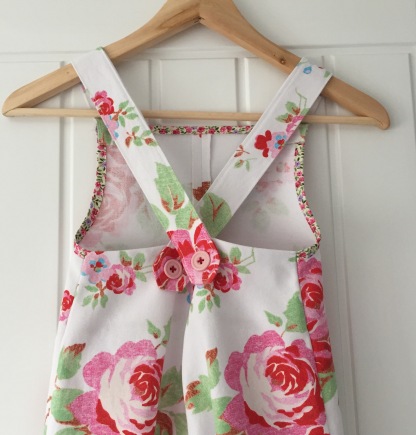 I’m hoping to get some photos of Ruby modelling them – if I do, I’ll post them next time.

He’s pretty pleased with himself!