I have spent the last few evenings wiping up berry coloured fluff from almost every surface in my house!  I suspect it will be like glitter from Christmas cards and be appearing here and there for weeks!

What have I been doing?  A while ago I bought some lovely green boiled wool from Ditto Fabrics with no particular project in mind.  I pre-washed it and it firmed up a bit more than I was expecting so I decided that rather than make a skirt I would try an unstructured cardigan/jacket type of thing.

I found this Vogue pattern and was swayed by the fact that it was made up in fabric of almost the same shade of green. 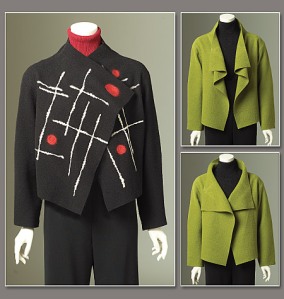 I’m not sure I’m particularly taken with the needle felted version on the left!

I then discovered I didn’t have quite enough of the green fabric!  Having forked out on a Vogue pattern I looked around for alternative boiled wools.  I found this one from Clothspot which wasn’t quite as expensive as some of the others I looked at and is the most glorious berry colour.  I decided against pre-washing it and just steamed it vigorously before cutting out.

I recently purchased some Swedish Tracing Paper on the recommendation of Portia over at Makery.  This is amazing stuff which can be used for tracing off patterns and making toiles.  One of the advantages is that it is 1m wide so there’s no sticking together of bits of tracing paper that aren’t quite big enough!  It doesn’t tear easily (except when you catch the edge of the arm hole on the corner of the table and pull it hard!) and sews very well.  Here’s my toile which I cut in the smallest size. 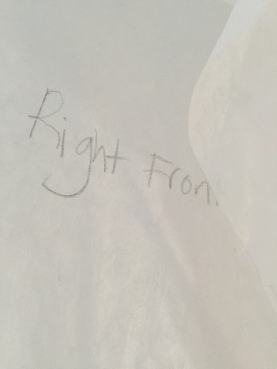 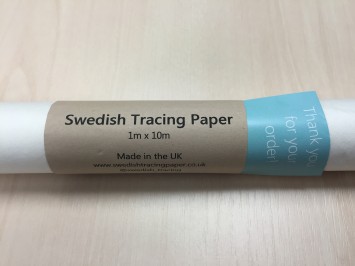 The jacket is a VERY simple construction and I sewed up the toile in no time at all.  The rather surgical looking stitching on the sleeve is a dart which you construct by removing a triangle of fabric and zig-zagging the flat cut edges together.  The stand up ‘collar’ is cleverly created by a row of top stitching on either side of the top section of the shoulder seam.

This is not a fitted garment so I continued to the main event in the same size without any adjustments.  I’d read that sewing with boiled wool could be tricky and it was best to use a ballpoint needle.  I just used the needle already in the machine and it sewed beautifully, even the top stitching.  I did think about trying to temporarily stabilise the cut fabric from behind for the sleeve dart before I sewed it but in the end I just pinned across the cut to hold it together and sewed very slowly.  I ended up with a small gap where I went a bit off piste so sewed over the whole thing a second time.  I had thought of doing this anyway as I wasn’t convinced it would hold together in the long term.  By the time I did the second sleeve it was getting late so I just whizzed straight down the dart without pinning or extreme caution and it was perfect!

The sleeves went in really easily with no easing required.  I appear to have limited spacial awareness and every time I set in a sleeve I have to put the garment on Doris to work out how it should go together!

I put on the finished garment, looked in the mirror and was underwhelmed.  I went downstairs and W’s expression was definitely not encouraging.  It did absolutely nothing for me.  This is what I didn’t like and what I did to resolve it :

At the end of the whole process I realised how much more confident I am than just a few months ago when I would have just abandoned the project in despair.  I certainly wouldn’t have chopped a chunk of fabric out of something in such a cavalier manner!

Here’s the final outcome.  I have to say that I’ve accepted that such an unstructured shape is not really for me and I’m not entirely sure what I will wear it with but we are a lot further forward from W’s dubious look the other evening and I think I will give it a go.

Just spotted a thread that needs trimming on that sleeve but hopefully the picture shows how relatively invisible the sleeve dart is.  And try as I might there is no way that the jacket will drape in a waterfall fashion at the front like it does on the pattern image!

As I had the house to myself over the Bank Holiday weekend I spent some lovely uninterrupted time at the sewing machine.

The spotty skirt is finished.  I’m very glad I decided to line it because it has given it more body and it now hangs much better.  I always find that sitting at my desk all day in a skirt lined with a satin-type fabric seems to put too much strain on the back seam and the fabric starts to pull at the stitches.  On the last couple of skirts I have added a strip of satin ribbon, stitched along either side of the seam line, and this has definitely ‘spread the load’ and made a difference.  I’ve done it again on this skirt just to be on the safe side.

I also decided to finish the hem with bias binding partly because I had cut it slightly too short and partly because the fabric had a tendency to fray rather drastically.  I used this tutorial which was very helpful because I’ve never been sure how to finish the ends on bias binding and this worked perfectly.  I know the grey lining and binding don’t really match the fabric but the lining was already cut out for another project so it saved a lot of time.  I find it is much easier to hand sew the hem using the binding and it does give a really neat finish.  The two layer construction of the fabric meant that I could just catch the inner layer so no stitching shows on the outside. 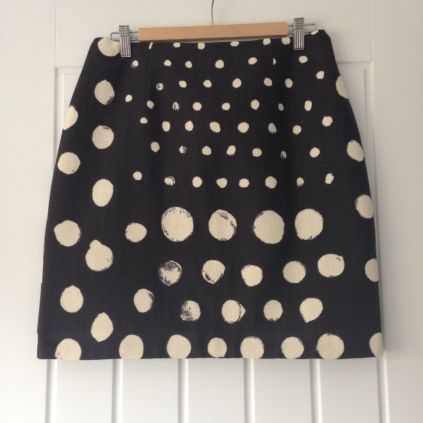 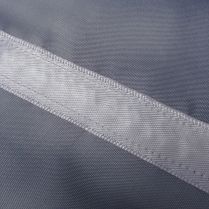 Next up was yet another Coco top.  I mentioned the fabric in a previous post – a ponte Roma from Clothspot.  When I came to use it it was a lot thinner than I had realised so I decided against the funnel neck and just went for the round neck version.  I’m not crazy about the fabric and the stretch is minimal so it is a bit of a wriggle to get out of it!  I’m sure it will be a useful basic though. 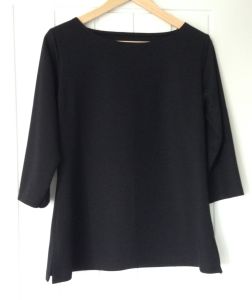 Last, but most definitely not least, the Brighton Pavilion dress (Butterick See & Sew B5447) is finished!  It took no time at all once I got on with it and I absolutely love it.  I’ve just noticed this photograph makes the hem look like it slants but it definitely doesn’t.  The princess seams which are just visible in the first picture have blended in pretty well and the dress is lined in a lovely fine lawn which is really comfortable to wear.  We have a party to go to on the 30th and this will be the perfect party frock!  I’m so glad I’ll get a chance to wear it during Me-Made-May. 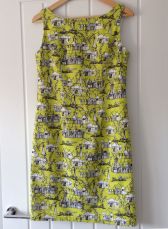 I’ve nearly finished another skirt with a nautical theme but that will be the subject of a separate post.

I did it! I signed up for Me-Made-May. This is my pledge :

I, Jane of janemakes.wordpress.com, sign up as a participant of Me-Made-May ’15. I endeavour to make better use of all my hand sewn garments and aim to wear at least one Me-Made item for five days each week for the duration of May 2015. I also challenge myself to make one new garment every week during May to add to my collection.

I decided that I just don’t have enough suitable outfits to provide enough variation to commit to one item every day of the week but I’ll see how I go. I hope the weather warms up soon because a lot of my clothes are definitely summer-orientated.

Today is the first of May and I am wearing my olive striped Coco top with a denim skirt. I always worry when I first wash a handmade item because I tend not to wash fabric before cutting out and I dread things emerging from the washing machine shrunk to half their original size. Mind you, when I made my first ‘proper’ skirt a few years ago I fully expected it to disintegrate into its separate pieces the first time I wore it!

I have been reviewing the limited number of hand sewn garments in my wardrobe and there have been a few minor repairs to undertake. I noticed a small mark on a favourite striped top which no amount of stain remover would shift do I decided to add pockets to disguise it. I had none of the original fabric left so I used some grey knit fabric (more about this below) and fashioned some patch pockets. This fabric is very thin so I used a double layer and I’m quite pleased with the result.

This pattern is from Hot Patterns – the Plain & Simple Fitted T Redux. It has a back seam which gives a nice fit, although it does mean extra care when using stripes. I started another top from the same pattern last night in a plain grey knit fabric and it is well on the way to being finished. I bought this fabric some while ago in Lewes but I can’t remember where from. It has some cashmere in it and is lovely and soft. I was a bit nervous about using it because I thought it would be difficult to handle but it has been quite well behaved so far. I spent a long time attaching the neck band because it looked like it wasn’t going to fit but I was very determined. I did top stitch it because the fabric tends to curl up a lot at the edges and this has done the trick.

The bright green Coco is finished.   I left the side splits off this one. Here’s a possible outfit for Me-Made-May! 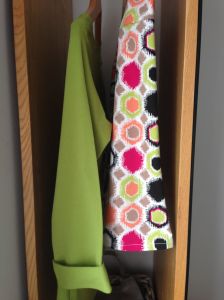 I have several other projects lined up. I bought some fabric from Clothspot the other day. I discovered the site when searching for stretch cotton shirting and bought a remnant for £7.50 (2 metres). I’ve never even thought about making a shirt but this is a lovely crisp fabric with a slight stretch and if I can overcome my fear of buttonholes I’ll give it a go. The other two fabrics in the pile are a fairly robust denim (to become a skirt) and a black ponte roma which will probably become a Coco top with a funnel neck to replace a favourite Cos top which accidentally ended up in a hot wash with a pile of towels. 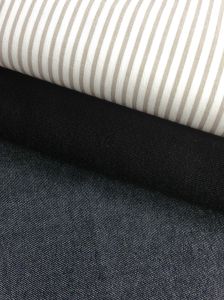 Have a great Bank Holiday weekend.