This was originally supposed to be a sewing and baking blog so that gives me an excuse to talk about my latest efforts in the kitchen.  Following W’s heart attack (I still find it hard to write that – or say it out loud – without feeling shocked) he knew that some major dietary changes were needed!  He’s well known for having a hearty appetite and apart from five days when he wasn’t allowed to eat after the previous life-threatening incident (I’ll spare you the details) he’s never been known to refuse food!

I’ve got an ‘O’ Level in Food & Nutrition so obviously consider myself to be well qualified to be his dietary advisor but just in case Mrs Jones didn’t cover everything required back in the day we’ve been doing a lot of internet research.  We’ve always eaten reasonably healthily at home but portion control is not W’s forte and when he’s been unsupervised all sorts of bad behaviour has been going on!

His new diet is now carefully monitored (by me) and involves a lot of porridge, vegetables, oily fish and pulses.  It also includes a daily matchbox size piece of cheese as advised by a good friend of ours who had a heart attack last year, a suggestion supported by the cardiac rehab nurse. This is a small matchbox and not a box of Bryant & May extra long matches as he might have hoped.  He is very determined and there has been absolutely no back-sliding.

However, everyone needs a treat now and again so part of my Googling activity involved investigating healthier, low fat and low sugar alternatives to cake!  I’m reluctant to get on the bandwagon and use coconut oil as it contains an enormous amount of saturated fat and I’m not sure that its apparent benefits make up for this.  I have tried it in the past and am not that keen on everything having a background flavour of coconut!

I was also trying to avoid the addition of alternatives to refined sugar which crop up in many recipes – maple syrup (an old favourite on porridge), agave syrup, honey, etc. which are still sugar at the end of the day.  I’m also not sure about Stevia which is apparently 200 times sweeter than sugar and has no calories, particularly as it has been found to lower blood pressure and W’s is already being kept low with medication.

I finally found a recipe for a fat, egg and sugar free carrot cake here.  The sweetness is derived from dried fruit which is high in fruit sugars so not for excessive consumption but OK for a weekend treat.  I adapted the recipe by using spelt flour because (a) I already had some and (b) I think it has a more interesting flavour than wheat flour and is apparently more easily digested.  I also decided to bake the mixture in individual muffin tins which dealt with portion control.  I did find I had to add extra carrot juice, a least three times the amount stated, to achieve the right consistency.

I really wasn’t convinced this recipe would work but I was wrong!  The ‘muffins’ were delicious warm and cold and will hopefully still be good after being in the freezer which is where the bulk of them are stored. The best compliment was my sister eating a whole one as she very rarely eats cake/puddings/biscuits. 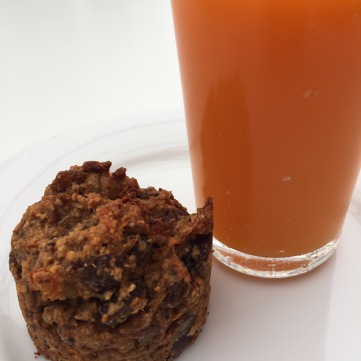 I now have plans for variations on this theme involving other vegetables, nuts and dried fruit and will report any successes here.  Following a comment from Linda at RemakeRemodelRecycle on my last post suggesting I feature healthy meals and tasty salad ideas from the new regime I may just do that too.

I’m also tempted to report regularly on W’s progress in terms of weight and inches lost – just to encourage him in public.  As of 13 July the statistics are as follows :

Pretty impressive, even if it does sound a bit like an entry from Bridget Jones’ Diary (and I’ve mixed up Imperial and metric measurements).  I’m very proud of him and he is looking more handsome than ever!