My sewing activity has been somewhat curtailed due to the horrendous rain we had recently.  Our conservatory sprang a leak and before I realised it the long (and thankfully cheap and cheerful) table that I use for cutting out fabric was completely soaked.  It is now drying out but sadly the laminate finish is peeling off.   The table is currently lying on its side and there is a bucket in its place waiting for the next downpour.  Discussions are in hand as to where to go from here (I’m hoping major improvements!) but in the meantime the conservatory is a chilly, damp and slightly mouldy place that isn’t conducive to creative activities.  I’m not posting a photograph as it’s a rather depressing sight!

As a result I’ve been sticking to smaller projects that I can cut out on my sewing table without having to move everything off it.  I’d been wanting to make another Anya Bag, this time for me, with the leftovers from my mustard denim Brumby Skirt.  There was JUST enough fabric, although I had to adapt the straps slightly.  The instructions are to fold the fabric strip into the centre along the long edges and then fold in half again before stitching along each side.  I just folded in the edges about 1cm and then folded in half but the fabric is sufficiently robust for this not to be an issue.

I had hoped to line the bag with the lovely fabric that was part of my #stitchingsanta gift but there wasn’t quite enough.

As an alternative I used some fabric my mother gave me during a recent clear out.  It was originally used years ago to make a dress for a rag doll and I think it works quite well here.  I love making this bag. 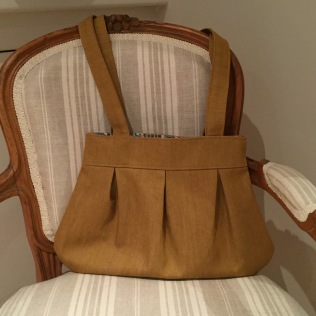 I was going to use the bag today but I decided that matching your bag to your skirt was probably going a bit too far!

I’ve recently started following Jen from My Make Do and Mend Life.  Jen’s journey began when she decided that she and her family would spend a year buying nothing new and she is now committed to lessening their impact on the planet.  Having recently watched Trust Me I’m a Doctor and heard about the scary chemicals that lurk in off-the-shelf cleaning products (including some eco ones) I’ve been researching the possibility of making my own and Jen is something of an expert.  She’s even made her own dishwasher tablets!  I’ve also been trying to further reduce waste in our house since watching Hugh Fearnley-Whittingstall’s programmes.  I was horrified to see what some people chuck out!

Where is this leading ….?   I’ve managed to avoid buying new RTW clothing for quite a while now but one thing I’ve missed is knitwear.  I can knit but I always struggle when it comes to following patterns, shaping and anything fiddly.  There is a half finished cardigan hidden in my sewing room that is testament to this.

I decided to combine two projects, reducing waste and kick-starting my knitting, by making a dishcloth!  I found a sweet pattern on Ericka Eckles blog and produced this. 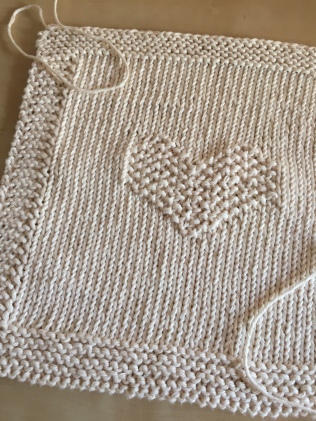 I’ve now sewn the ends in and just have to bring myself to ditch the disposable blue cloths and actually use it!  I bought two balls of cotton yarn so I’m now working on another pattern I found here. 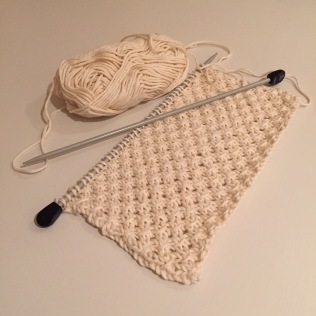 I’m really enjoying it and it is a lovely cosy thing to do on chilly evenings.  My mother is always horrified when she sees me knit because I don’t hold the needles properly and she is determined to change this.  Previous attempts have resulted in me wailing in despair because I just can’t get it right but perhaps now is the time to try a bit harder!

Associated with reducing waste I also did a spot of refashioning.  For several years I’ve had a favourite striped dress from a well-known online retailer which had gradually shrunk until it was no longer wearable!  I love the fabric so decided to chop off the restricting top half and turn it into a skirt with an elasticated waist.  I looked up various tutorials for adding the elastic but when I tried this I just couldn’t get this wide elastic to stretch as I sewed.  In the end I just joined the elastic in a loop, gathered the cut edge of the fabric using the dental floss trick and sewed the elastic on with the join at the back.  It was already hemmed so this was a very quick project.   I’ve worn it a couple of times and it seems to have worked.  It is SO comfortable!  Not sure what I can do with the leftover top half? 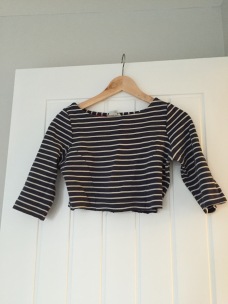 I will get that Moss Skirt cut out eventually but in the meantime at least I’m not sitting idle.  Mention of the Moss Skirt has reminded me that as a result of my following Jen on IG – @makeandmendlife – I connected with @vintage_charity and we met for lunch this week.  It was just lovely.  We had already discovered so much in common (including these shoes) and then she mentioned that her next sewing project was this very skirt!  At the rate I’m going I think she’ll get there first.