In my last post I announced my eschewing of RTW clothing but also mentioned that I may not be quite so self-controlled when it comes to buying fabric.  Josie at the Fabric Godmother held her second open day on Saturday and the temptation was almost overwhelming!  The place was bursting at the seams with an fabulous array of fabrics (and sewists) and there was some serious swooning going on!

One of my main reasons for going along was to meet up with Becky from springystitches.  I’ve been following Becky’s blog for some while and she was one of my original inspirations.  She was as lovely in real life as I thought she would be and she was wearing this very dress on Saturday.  Given the amazing choice I think we were both pretty restrained.  I had planned in advance to buy some of this mustard denim and I wasn’t disappointed.  It is great quality and I think may become another Brumby skirt. 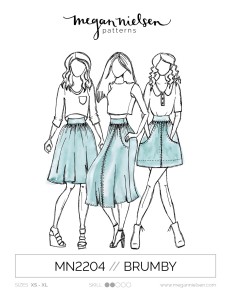 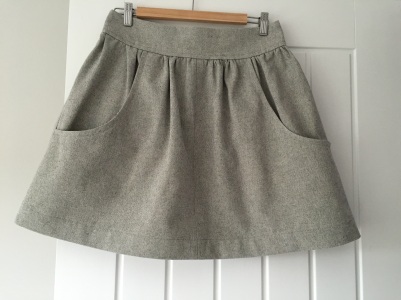 I really love the shape of this skirt which I have previously made in grey denim but the fabric is just a bit too stiff and I feel rather like I’m wearing a cardboard skirt!  I also failed to master the exposed zip the first time round so there is unfinished business here.

Becky and I both homed in on the Venice Modal and Silk Jersey which is the softest, smoothest fabric ever!  I went for the Plum.  The picture on the website doesn’t really do it justice and I’m not sure my own picture does either.  It is so silky I suspect it will shown every bump so will have to be made into something drapey.  I certainly won’t be using it for my first overlocker project, I have something very cheap and cheerful for that! 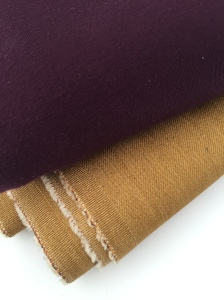 That was it for me – just two purchases (plus some matching thread) but there were several other fabrics I had a good look at which may end up being ordered online.

On our way to Hove we decided to call into Emmaus in Portslade.  Emmaus is a world-wide organisation which enables people to move on from homelessness into a supportive community.  The residents are known as Companions and work full time collecting and reselling donated items.  Our first experience of Emmaus was in France where we visited an enormous complex with room after room piled high with crockery, glassware, pictures, books, fabrics, tools and, most incredibly, complete sets of 1950s kitchen units! I do sometimes regret that I didn’t buy some of the French linens which were considerably cheaper than I’ve seen them elsewhere.  Another time perhaps.

The set up in Portslade is much smaller with a shop, a café and a garden centre.  There was some promising looking vintage clothing and a really beautiful art deco cabinet but what we actually came away with was a pair of vintage motorcycling goggles for W!  I hope you’re ready for this photograph. 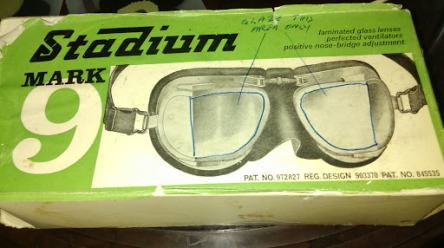 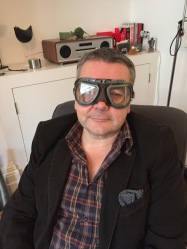 You may be able to make out some writing on the box in blue biro which reads “glaze this area only”.  Someone has obviously had the goggles glazed with their own prescription lenses and what is amazing is that this appears to match W’s own prescription.  He’s thinking of making use of them on the ski slopes this season.   He’ll certainly attract some attention!