I don’t usually buy magazines, sewing or otherwise, although I am lucky enough to get a subscription to Selvedge as a birthday present every year.

However, I am occasionally tempted by a nice cover or a free pattern and I recently spotted a sew along opportunity for a Lisa Comfort (from Sew Over It) skirt in Issue 5 of Simply Sewing magazine.  I really liked the shape of this tulip skirt and as there was also a free kit to make a zipped purse I decided to give it a try. 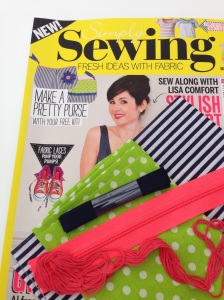 I will almost certainly make the skirt, although I’m not sure my usual sewing impatience will allow me to wait until Issue 7 of the magazine to finish it off!  The instructions look really clear and detailed so the project would be ideal for a beginner.   The fabric used for the version in the magazine bears a strong resemblance to something I used for one of my Morsbags.  I’m pleased to see that nautical fabrics are popular given a recent addition to my wardrobe, previously blogged about here. 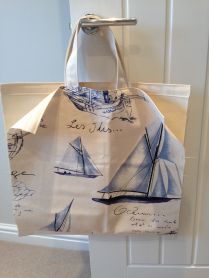 Onto the free purse kit.  This included fabric, zip, bias binding (for the zip pull and optional decoration) and embroidery thread (also optional).   I’ve never made a zipped purse with a lining before and the instructions were really easy to follow.  There was no mention of using a zipper foot but I used mine anyway.  I didn’t time myself but it can’t have taken much more than half an hour to make.  I traced off the pattern using my fancy new tracing paper which is really nice and crisp and will definitely be useful for non-sewing projects as well.

I’m not a great one for embellishments so I didn’t bother with the suggested embroidery and bias binding flowers. 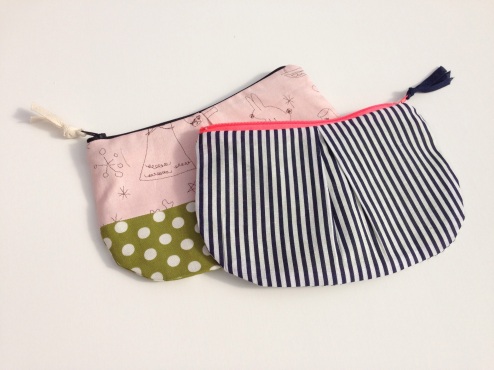 I realised I had several zips of a similar length which will never get used for dressmaking so I thought I’d make a few more bags.  The second one took a bit longer because I decided to use two different fabrics for each bag piece but it was still a quick make, despite sewing the final seam without realising there was no thread on the bobbin for about 50% of the way round!  I have three more zips and plenty of fabric scraps to use up.

Having singed my fingers a couple of times ironing the pleats in these bags I’ve decided I will be investing in some of those silicone finger guards I mentioned in my last post despite their odd appearance!

The magazine has several other useful projects including some lovely stripy beach-inspired items – deckchair, windbreak and duffel bag, instructions on how to make your own bias binding and articles by Tilly Walnes and Claire-Louise Hardie of The Thrifty Stitcher (and resident expert behind the scenes at The Great British Sewing Bee).  There is also a rather cute toy monkey to make which would make a nice gift.  If I do make the skirt then Simply Sewing will probably have been a good investment and I’ll be recycling it by passing it on to my mother when I’ve finished with it.  NB : These views are entirely my own and I’ve not been commissioned by Simply Sewing to review the magazine!

For a final weekend project I re-covered my vintage sleeve board.  I can’t believe I’ve not been using this more regularly as it really does make ironing sleeves a doddle.  No more creases where you don’t want them.  I used this tutorial from Tilly and the Buttons which was really helpful.  I left the original heat reflecting cover in place because it was very well secured and was holding the padding in place.  I stuck with the instruction to make the cover fabric 5 cms larger than the board itself even though I was working on a smaller scale because the sleeve board is actually pretty much the same depth as my large board.  I used some stripy fabric that I’ve had for a while and seems to be never ending.  It has already been used to make several bags, an apron and re-cover my mother’s wheat bag.

The application of the bias binding was slightly tricky round the curves on the reverse of the fabric and I was worried that the channel would be restricted but the cord I used was quite fine and it went through without any trouble.

I think the outcome was pretty successful and a great improvement on the rather stained original.  I’m not sure I want to tackle a full size board for now although a lovely fabric might make ironing more pleasurable. 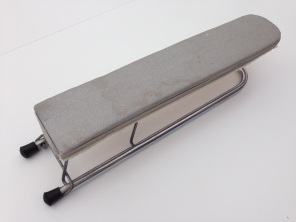 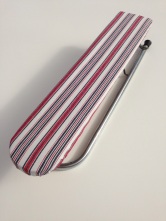 Keep cool in this week’s heatwave if you are in the UK!