Me-Made-May this year certainly helped focus my mind on the gaps in my wardrobe and what I need to make to fill them. The answer is mainly tops.   This set me off on a major sort out in the sewing room.  I’ve packed away winter fabrics for now and made the decision not to buy anything new until I’ve worked my way through at least some of what remains.  We’ll see how long that lasts!

I decided the best way forward was to spread everything out in one place and match it up with possible patterns.  I should say that this isn’t really everything – just the best bits.  There are many other pieces of fabric that would require more of an effort to create a garment so they are tucked away somewhere else.

W was away having a rip-roaring time at the How The Light Gets in Festival in Hay on Wye so couldn’t comment on my commandeering of yet another room in the house!  The guest room is next to the sewing room so not far to carry everything.  Here’s what it looked like when I’d finished. 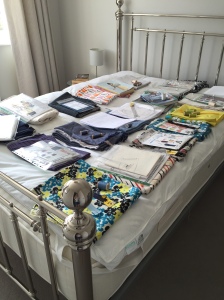 Not too excessive.  Around 17 possible new garments.  Unfortunately most of them seem to be looking like skirts or dresses so the half-hearted pledge not to buy any fabric is already on shaky ground.  No progress has been made so far but I’ve now packed everything away neatly in boxes and every fabric has a pattern, thread and a zip (where required) associated with it.

The next task was to tackle my wardrobe.  I didn’t take a before photograph and I wish I had – too late now.  I was ruthless.  I had determined during MMM what I liked wearing, what needed altering to make it wearable and what I was never going to wear again – both me-made and RTW. I got used to taking my photograph every day and it did help me recognise what suits me.  One thing I realised is that I quite like tops tucked into skirts which is something I rarely do.  I also wore more bright colours and florals. I usually tend to go for neutrals and leave the cheerful stuff in the wardrobe so I’m aiming for more colour/pattern in future.  These were the three outfits that got most likes on IG so clearly this is a good plan!  The Esme dress by Lotta Jansdotter is clearly a winner too as the dresses were both from that pattern. 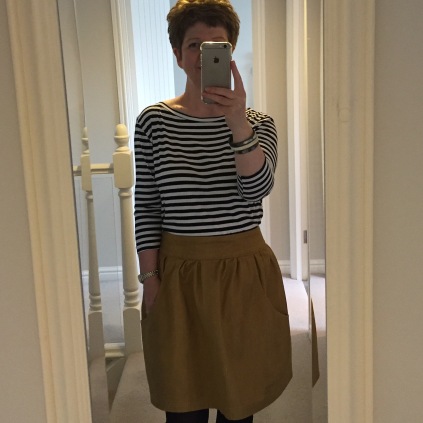 Five bags of rejected clothing went to the charity shop.  There has been a lot of discussion on IG and blogs about giving away handmade clothing and until now I’ve never done it.  This time I did and it wasn’t too painful.  Again I didn’t take photographs because I was working fast and furious to avoid any mind-changing!

The final (and least enjoyable task) was to tackle the ironing pile.  That is a loose term to describe a cupboard into which an ironing basket was wedged with an enormous heap of clothing heaped on top plus a couple of other bundles lurking in a bedroom.  After several hours, some wine and a lot of iplayer radio downloads I arrived at this.

An empty basket,  which I did photograph because it is such a rare occurrence and I want to be able to remind myself how lovely it is to achieve such a state.

I was in serious need of a streamlined wardrobe so save time and effort as my life is quite hectic at the moment with the ageing parents in separate locations so all the beautifully ironed clothes were returned to the emptied and cleaned wardrobe in an ordered fashion. 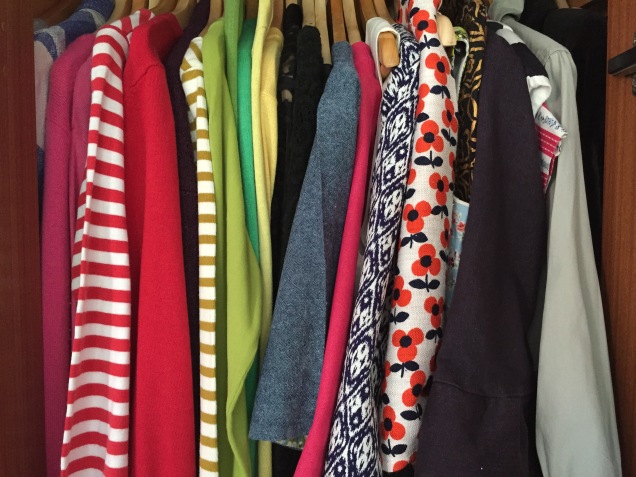 On the left are skirts of all hues with tops and jackets in neutral shades.  On the right are tops in brighter colours with dresses and coats.  The latter had to be ‘filed’ together as this is the only place where there is enough room for them to hang straight down.  Winter skirts and sweaters have been packed away.   I estimated that approximately 50 – 60% of the garments are me-made.  The rest are charity shop finds or have been around for ages.  There are just two new items added in the last twelve months or so which I’m pretty proud/amazed about.

Unfortunately W did notice quite quickly after his return that his share of the wardrobe had been somewhat diminished!

I now need to get on with some sewing.  More about the plans for that in another post.