There has been very little sewing going on here (more of that later) as in my current role as post-heart attack nutritionist I am primarily working in the kitchen!  The new regime has had an impact on my sewing in another way in that I too have lost some weight so my current wardrobe needs reviewing.

On the food front, our meals are generally looking quite green!  I’m not really following any specific recipes, although I did order a very good book entitled Eat Your Way to Lower Cholesterol which has some really good recipes.  W’s daughter also sent him a helpful book on recovering from a heart attack so we are becoming experts.

I’ve also discovered that I quite like beetroot when I’ve always thought I hated it.  I think this goes back to school lunches when the vinegar soaked beetroot was always next to the hard boiled egg in our salads.  I have a major aversion to eggs unless the white and yolk are really well combined and there was something about a rubbery egg white turned pink by the beetroot that was the final straw.

I’ve been roasting beetroot as well as using it raw and in a new baking experiment I used it in some sugar, egg and fat free brownies.  The first attempt was passable, not spit out disgusting anyway, and W thought they were OK but rather bland.  I had used raw cacao powder as chocolate and beetroot do work well in ‘normal’ cakes and he thought that some chilli in the background might help.  The second version was a great improvement and they really do look like cake.  I would point out that I don’t have a napkin embroidered with every possible vegetable but it just so happens that I do have one with what appears to be a beetroot on it. 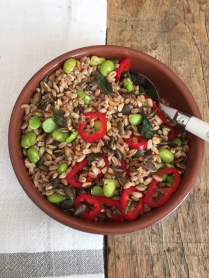 This is the recipe I’ve arrived at so far.  I’m really not suggesting anyone tries it because they are definitely not a sweet treat and are an acquired taste but W likes them and they are a better option than biscuits or chocolate.  I just thought you might be interested to see how my mind is working!

Place the chopped dates in a pan with the water and chilli and bring to the boil.  Simmer for five minutes, remove and discard the chilli and allow to cool.  Once cool, place the dates in a food processor with the beetroot and cacao powder and blend until smooth.

Mix the flour with the baking powder, bicarbonate of soda and salt in a mixing bowl and stir in beetroot mixture followed by the chopped walnuts and grated apple.  Mix well and add the ¼ cup of milk/juice/water.  Spoon the mixture into the the cake tin.  It is quite an alarming colour at this stage so I’ve not included a photograph.

Bake for 20 – 25 minutes or until firm and a skewer inserted into the middle comes out clean.  Cut into squares when cool.

If you are planning any sugar/fat free baking bear in mind that things don’t keep well, although I thought they tasted better the day after baking.  The first batch of these went mouldy very quickly so the second lot are in the freezer.  Interestingly, I have genuinely found that you lose the sugar craving very quickly and I have refused chocolate offered to me on more than one occasion.

Onto some sewing.  I’m a big fan of the Colette Laurel dress and have already made three versions.  I’d been invited to the races at Goodwood through work.  I’d never been before, it really isn’t my thing, but obviously needed something to wear!  I’d bought some very pretty Liberty fabric at a special event at Clothkits a while ago and thought this would be just the thing. 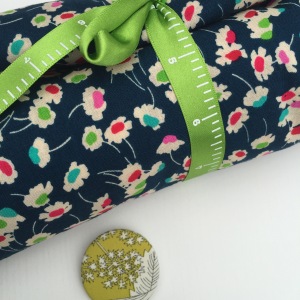 My original version of the Laurel was a size 6.  I had subsequently cut the size 4, mainly because I didn’t have quite enough fabric on that occasion, and it was slightly skimpy.   As I have now shrunk slightly I went for the 4 again this time.  I underlined the fabric as it is quite delicate and slightly see-through.  I tried on the almost finished dress and W looked dubious – “it’s a bit sack like” he said.  He was right.  At this point I didn’t have time to do anything about it so decided to wear something different to the races and put the Laurel to one side.  A couple of days later I went back to it and took the side seams in by a maximum of an inch or so each side and that did the trick.

What I especially love about the Laurel is the cuff option which I’ve now used three times.  The dress did get worn quite soon afterwards as I was also invited to a cricket match.  I don’t know much more about cricket than I do about horse racing but it was a lovely sunny afternoon.  The photo of me wearing it isn’t great but the cuff looks nice! 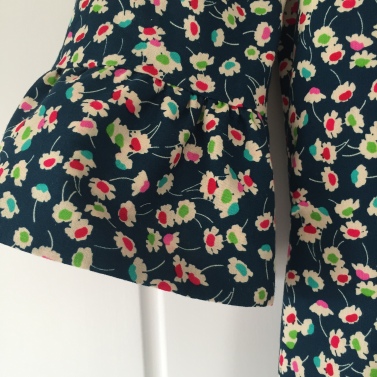 The only other recent sewing for me has been a refashion of a charity shop frock.  It was a size 18 sundress (I forgot to take a before photo) with lots of lovely fabric in the skirt.  I wanted to keep the fullness so I just chopped off the bodice, added some in-seam pockets, gathered the waist and added some elastic for the waistband.  I couldn’t find a blue to match so went for pink!  I’ve worn this several times and have another dress lined up for similar treatment.  Who else is following the daily posts from Portia on this year’s The Refashioners?  Some great inspiration and I do have two pairs of jeans awaiting attention for the Community Challenge. 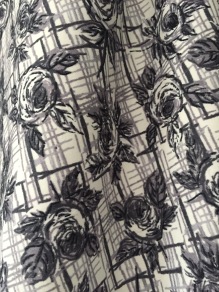 For any of you following W’s progress, the statistics are now :