I reported in my last blog post that I would be visiting the Knitting & Stitching Show at Olympia on Saturday with Clarinda Kaleidoscope, Butterflies & Lemon Drops and Red W Sews.  The threatened snow didn’t materialise, although there was a sprinkling of icy hail on the ground when we arrived at Clapham Junction.  We were taken by surprise at the length of the queue to get in but it moved pretty quickly once the doors opened.

We agreed on a methodical approach, moving along each aisle in turn so we didn’t miss anything.  I’m not great with crowds and this is one of the things that puts me off these shows. It does end up being a bit of a battle to move around in the busy areas – especially with the many trolleys being towed round filled to bursting point!  I do also wonder about the relevance to knitting or sewing of some of the stands! 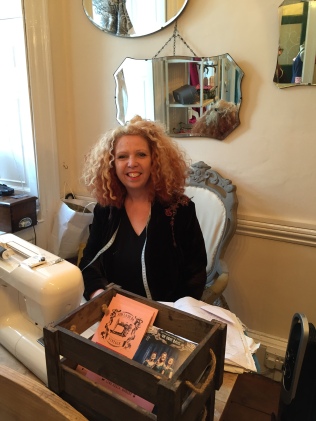 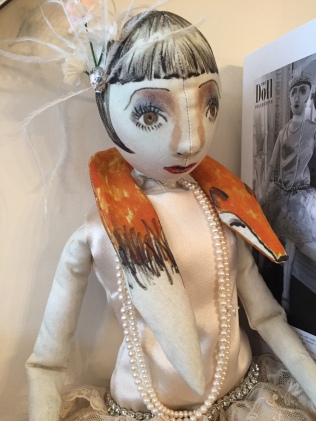 An Ikat design fabric from the Sew Over It stand – and cut by Lisa Comfort herself who was doing an amazing job in a tiny space.  I’m planning an Esme dress from the Lotte Jansdotter book I got for Christmas.  I’m pretty sure I’m not going to look as stylish as Lotte in her various versions of this dress!

I’ve traced off the pattern (I just know I could never cope with a Burda pattern – this was quite enough of a faff for me and there are only three or four simple garments and some bag patterns on the sheets!).  I think I’m going to make a quick toile to check the fit as this dress has no fastenings and the temptation will be to make it too big!

An organic barkcloth with a 50s vibe from Higgs & Higgs for a skirt – pattern yet to be decided.   I’d seen this fabric several times on Instagram and it resembles the iconic Calyx design by textile designer, Lucienne Day.  I have some offcuts of the (very expensive) reprint of the original Calyx fabric given to me by my sister which may also be turned into a skirt.

A VERY bright pink denim from Fabrics Galore – also for a skirt and definitely one with pockets.

I think I was quite restrained.  I was bearing in mind that I’ll be at The Fabric Godmother this Saturday on a course and will almost certainly come away from there with more fabric!

27 thoughts on “The Spring Knitting and Stitching Show”